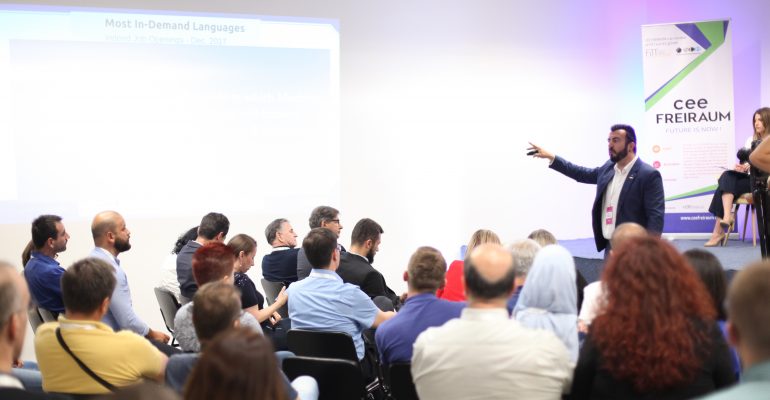 Prof. Dr. Mirsad Hadzikadic, gave an introductory lecture on the advanced technologies at Innovation Café no. 2, which was held in Tuzla on 16 July 2018. Prof. Dr. Mirsad Hadzikadic, leading world renown in Information Technology and Director of Complex Systems at the University of North Carolina in Sarlot, was honored and pleased to host an introductory lecture on the Innovation Café’s advanced technology, held on July 16 Tuzla.

Mirsad Hadžikadic is Founder and President of the Advisory Council for Bosnia and Herzegovina in Washington and the Bosnian-American Academy of Arts and Sciences, Dr. Hadzikadic currently holds the position of Executive Director of analytical programs in the field of Analytic at all colleges of North Carolina University in Sarlot. He is the winner of the Life Work Award for Information Technology Associations at the State of North Carolina and the City of Sarlote. It places science, development and excellence in the center of every social activity.

The key areas of expertise of Dr. Hadžikadić, where more than 30 years of working experience are information technology, including academic and industrial debts. After graduating from computer engineering at the Southern Methodist University in the United States, where he was Fullbright scholar, in 1987, Hadžikadić joined the University of North Carolina in Sarlot, USA. His research covers the field of analytics, cognitive science, medical informatics and complex adaptive systems.

He has written over fifty scientific papers in international and American magazines, conferences and symposia. He has published three books, has organized many international conferences and is the editor-in-chief for a science journal in the field of politics and complex systems. Dr. Hadzikadic led teams or was part of research teams who designed models and simulations of economic, health, biological, financial, political and social problems.

Edhem Eddie Custovic said: ‘’I love inspiring people. 16th July I gave a one hour presentation at the DKR – Robotics Center in Tuzla. I spoke about “Innovation as an imperative for economic development”. I attempted to demystify the term “innovation” for the audience and to really hit home the point that innovation has a different meaning for every person. However, at the core of each definition is the execution of an idea that addresses a problem and in turn creates value for an entity. I showcased some examples of organisational structures and emphasized the importance of the different dimensions of innovation – technological – social – political – religious– cultural. Innovation is an interdisciplinary full contact sport. My advice for the youth of Tuzla was simple: Think about what you can control and what you can’t control. Focus on what is in your direct influence for quick wins. Stop blaming others for your failures and lack of drive. Start believing that you can! Start believing that we can! I say “we” because “a country’s wealth correlates with its collective knowledge”. We have to increase investment into research and development. Bosnia & Herzegovina ranks amongst the bottom 10% in the world for investment into R &D (total and % percentage of GDP). Our risk averse culture and satisfaction with status quo is the main reason we struggle to make any serious gains. On average a human being is told almost 150,000 times “You can’t do that” by the time they turn 18 years old. Eventually you start believing it. We simply have to remove ourselves from this mindset. What i walked away with from this evening is that there is hope. I met so many young people who are rallying and want to make a difference. Thank you Tuzla.’’

Edhem (Eddie) Čustović lives in Melbourne, Australia, where he works at the prestigious La Trobe University as a project coordinator for academia and industry.

Numerous domestic and world media are writing about it, as it extends the boundaries of science and research through its inventions and innovations. But his journey to Australia was certainly not easy. He left BiH 20 years ago, and through Switzerland and Germany he came to the country he calls home today.

He is an active member of the Institute of Electronics and Electrical Engineering (IEEE), the largest professional organization in the world. In this institute is editor of the IMPACT publication, IEEE president of Australia’s state of Victoria and vice president for IEEE Young Professionals at the global level. Since it was closely linked to its country of origin in Sarajevo, last year it organized a large congress “Technology and Innovation for a Brighter Future”, led by many world-leading engineering experts, with the help of young colleagues from the homeland to open the door to the world. Young people in BiH also helps through the Foundation “Bosnia & Herzegovina Futures Foundation”, which he founded with his brother Rešada, also a successful engineer.